InduSoft Web Studio is a SCADA system composed of modules that must be executed simultaneously. Based on the multi-tasking concept, each runtime module (Viewer, Driver, and so forth) is a thread and the operating system switches from one thread to other automatically. It is a common misconception that you execute a SCADA system when you execute a PLC program. A PLC program contains a simple loop:
Figure 1. PLC Program Loop 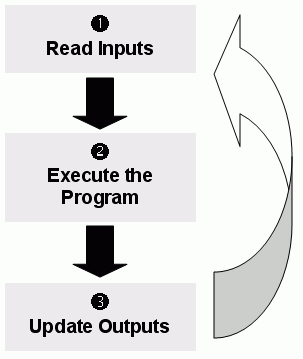 However, in a SCADA system, there are several modules running simultaneously, and most of them can read and write data. Because a SCADA system modifies data (tag values) continuously during task execution, the preceding diagram is not applicable.

InduSoft Web Studio only has one run-time process: Studio Manager.exe on Windows or CEView.exe on Windows Embedded. When you run a project, this process starts the Tags database and all of the runtime modules configured for the project. You can specify which modules (such as Viewer and Driver) will start during run time.

Note: All InduSoft Web Studio threads are set to priority 7, which is THREAD_PRIORITY_NORMAL. (Most programs contain this priority value.)

Real-time program (such as SoftPLCs and Device Drivers) threads are assigned a higher-priority value (THREAD_PRIORITY_HIGHEST); however, these programs must provide a mechanism to keep them inactive for some period of time or the threads with normal priority would never be executed.

InduSoft Web Studio uses the following parameters to prevent threads from staying active continuously:
Note: We strongly recommend that you do not change these default values unless it is absolutely necessary. Configuring these parameters incorrectly can cause the entire system to malfunction (for example, CPU usage will go to 100%) and/or cause some tasks to perform poorly.

If you must change the parameter defaults, note the values before making your changes so if a malfunction occurs you can return to the original settings.

To change the IWS TimeSlice and Period parameter default values:
The following figure illustrates how IWS executes a generic thread (such as the Viewer).
Figure 2. Executing a Generic Thread

In the next example, the Period and the TimeSlice values were changed as follows, but the default operating system TimeSlice period (20 ms) was not changed.
Figure 3. Setting a Higher TimeSlice

When the operating system is not executing the Viewer thread, the CPU can execute any other thread or remain idle (if there are no other active threads to execute). Remember, the IWS Period and TimeSlice parameters were created to prevent all threads from being active at the same time to prevent 100% CPU usage.

During thread execution, the thread must handle its pending messages. For example, the Viewer module must update any related screen objects. If there are no messages pending, the thread deactivates itself and gives control back to the operating system. The operating system immediately switches to the next active thread. In other words, a thread can interrupt its own execution — even if the operating system TimeSlice time period has not yet expired (which occurs frequently in real-world applications).

Note: The Database Spy, DDE Server, LogWin, and ODBC Runtime modules do not have a TimeSlice parameter. Consequently, after each thread handles all of its pending messages, the threads become inactive until the next Period message for each one of the threads occurs.