Save your own project symbols

A symbol is a set of one or more screen objects that is saved in the Symbols library, so that you can reuse it in your projects.

Every time you reuse a symbol, you actually make a copy that is linked to the master symbol in the Symbols library. (These linked copies are also called “instances” of the symbol.) Thereafter, if you make any changes to the master symbol, those changes automatically propagate to every linked copy in every project.

You can customize each linked copy of the master symbol by defining Custom Properties. For example, when you create a gauge that displays tank levels and then save that gauge as a master symbol, you can define custom properties on the symbol that will allow each linked copy to display the level of a different tank. 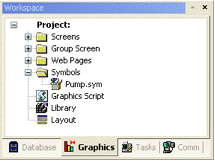 To create a master symbol and save it to the Symbols folder:

The symbol is now ready to be reused in your project, but the way it is currently saved, every copy will have identical properties. You must now define custom properties on the symbol — that is, the properties you want to be able to customize each time you reuse the symbol.

You can edit a master symbol after you’ve initially saved it, to add or delete objects in the symbol or to define custom properties on it. Remember that any changes you make to the master symbol will automatically propagate to every linked copy in every project.

Note: There is one exception. If you change the hint on a symbol — as described in “Create a master symbol” — then the change will appear only on new instances of the symbol. Existing instances will be unchanged.
To edit a symbol: 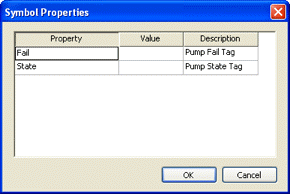 When assigning values to the custom properties of the symbol on the screens, the user can read the description as Tooltips just by moving the mouse cursor on the property name, as illustrated on the following picture:
Figure 16. Tooltip showing the description of the property

You can put a password on any of your user-made symbols to prevent them from being edited or analyzed by other users. To protect a symbol:

Once this is done, you will be prompted for the password whenever you attempt to edit the symbol or unlink an instance of the symbol.

Make a user-made symbol available to other projects

User-made symbols are normally available only in the project where they were initially created and saved. However, you can send a user-made symbol to the System Symbols folder of the Library, to make it available to all of your projects:

Insert a symbol in a project screen

To insert a symbol in a project screen and then complete its custom properties:

The custom properties are resolved during runtime, as shown below.
Figure 24. Symbol during editing (top) and run time (bottom) 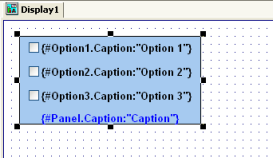 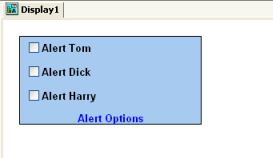 Note: Remember, the completed custom properties on each instance of a symbol are independent from every other instance of that symbol, but if you make any changes to the master symbol file, those changes automatically propagate to every instance.
Parent topic: Symbols library

Save your own project symbols

Web Studio Help > Save your own project symbols